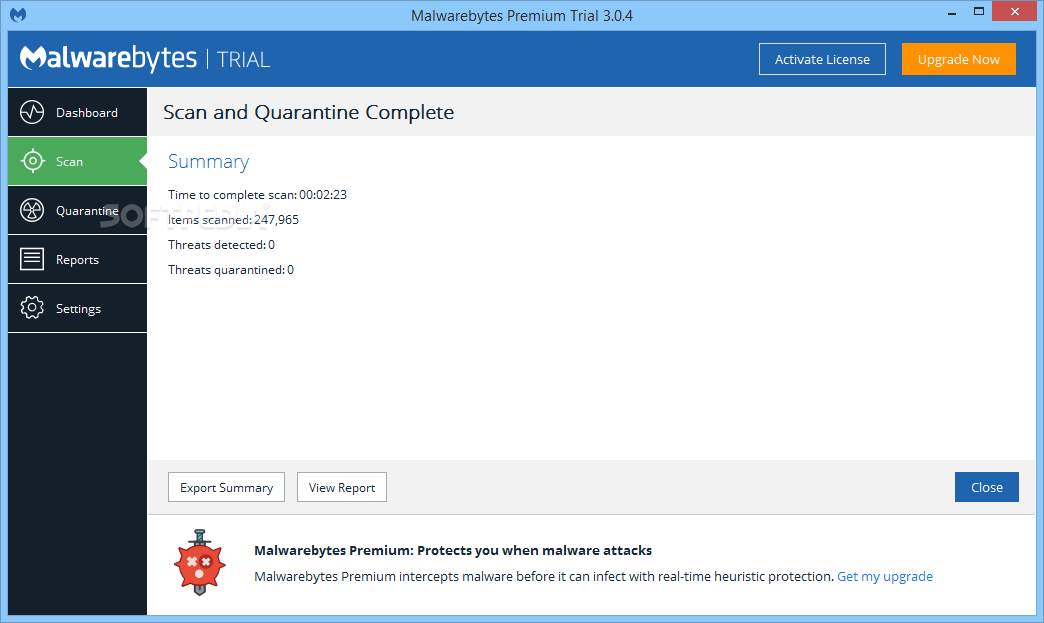 Malwarebytes All Windows PC owners need to run some kind of basic antivirus protection. For that, users have plenty of options — but Malwarebytes Anti-Malware isn’t one of them.

It’s meant to complement regular antivirus software, but that doesn’t mean they should overlook it. Setup and interface It’s easy to install Malwarebytes Anti-Malware. The Get Trial button is featured prominently on the Malwarebytes website , and when you click on it, you’ll be led directly to a download page. Some other antivirus companies redirect you to third-party sites for the free versions. Ignore that and click on the Download button at the bottom of the screen. Once the installer is downloaded, installation is as simple as that of any other program.

At the end of this bar are two links urging users to create Malwarebytes user accounts and upgrade to the Premium version. Below the tab bar is the thickest and most eye-catching bar: It’s colored bright green if the program says you’re secure, yellow if you haven’t run a scan in a while and red if it detects any malware or potentially unwanted programs PUPs. Below that is a set of four thin, white bars showing the status of Malwarebytes Anti-Malware’s license, database version, scan progress and real-time protection.

When we clicked the Scan Now button, Malwarebytes informed us that the malware-definition database needed to be updated, even though the Upgrade Now link higher up in the Dashboard was grayed out. Overall, the interface is colorful and straightforward.

We liked the horizontal layout and simple explanations that help users understand what’s happening without becoming overwhelming. Features and tools Unlike the premium version, Malwarebytes Anti-Malware does not let users schedule scans, so you’ll have to manually open the program and click the Scan button each time you want to check for malware.

After a scan, Malwarebytes Anti-Malware will list the suspicious items it’s detected and ask if you’d like to either quarantine them place them in a secure area of your computer that Malwarebytes controls , ignore them this time or exclude them from all future scans. You’ll most likely choose quarantine. If you decide certain items are not malicious, you can always restore them by going to the History tab and selecting the individual items.

Our favorite free tool is Chameleon , a countermeasure against forms of malware that try to disable anti-malware programs on the computers they infect.

There’s also Malwarebytes Anti-Exploit, a tool that monitors for attacks that get into your computer via software flaws instead of malware. How to Defrag Your PC Security performance For most antivirus software we review, we rely on results from German independent testing lab AV-TEST, which routinely examines all major security suites and scores them on their ability to detect both widespread and cutting-edge malware.

Its popularity has accelerated publicly seeing that its launch in the market. It is considered to be the maximum handy, user-friendly working system ever.

Thus, itвs far being used in many computer systems all around the international.

Before the reputable launch of Windows, 10 Microsoft has also launched Technical preview of the Windows 10 Crack to draw tech professional and IT specialists. Window 10 Crack Working 100: The Windows 10 may be upgraded easily if the real model of Windows 78 has been established previously. If the software isnвt actual, then there may be a problem in setting up of Windows 10 Crack in your PC.

Free Trial and 25% coupon discount in case of upgrade to pro Today, Malwarebytes Free Anti Malware Software is now available as a tool. Buy this product and get 90 days free of Amazon Music Unlimited After your purchase, you will receive an email with further information of how to enjoy 90 days. Hello, it’s only a free trial now. xelpha.me If you continue to have trouble with the paid app start a ticket, they will.